Terminalia arjuna is also known as ‘Arjuna’ and different parts of this plant such as leaves, fruits and bark are extensively used in traditional system of medicine. The stem bark possesses laxative antidysentric, and purgative properties. It is prescribed in the treatment of ulcers, inflammation, tumors, and diarrhea associated with blood as well as documented to have anti-nociceptive and immunomodulatory activities. Moreover, antioxidant activity and cytotoxic in hepatocellular carcinoma cells has been reported with bark extract. The stem bark possesses a substantial amount of secondary metabolites, which may act as resource of pharmacologically active agents and natural antioxidants. Phytochemicals such as gallic acid, ellagic acid, quercetin, which have been reported to be present in T. arjuna bark hold varying degree of antioxidant, protective and intestinal anti-inflammatory effects in rat models of colitis.15,16

Ocimum sanctum (O. sanctum) (the holy basil) belongs to the family Lamiaceae and is reported to possess antioxidant properties. The plant branches out from its base, with angle stems and open foliage. The plant shows aromatic flavor, is pungent and is commonly used for culinary purposes. Within Ayurveda, Ocimum sanctum is said to prevent diseases, promote general health and wellbeing. Previous studies have shown the multitude potential of tulsi including anti-stress, anticonvulsant, anxiolytic and antioxidant activities. Majority of constituents of hydroalcoholic extract of O. sanctum leaves include flavonoids (oleanolic acid, ursolic acid, orientin, and vicenin).17

The anticonvulsant potential of tulsi extracts has been delineated by few previous in vivo studies, conducted in acute seizure models such as maximal electroshock seizure (MES) and pentylenetetrazole (PTZ) model. In one of previous studies, O. sanctum extract has shown 50% protection from MES and PTZ induced seizures.18

Standardized extracts of TCS, TAE and OCE were obtained from Sami Labs Limited (19/1, 19/2, I Main, II phase, Peenya Industrial Area, Bangalore, Karnataka-560058) as gift samples. Other chemicals are purchased from SD Fine Chemicals Ltd. (Mumbai, India). All chemicals used in the experiment were of analytical grade.

The DPPH free radical scavenging activity of diverse combinations of any two standardized extracts (1:1) at different concentrations were measured from bleaching of the purple colour of 2,2 Diphenyl -1-picryl hydrazyl (DPPH). A 3 ml solution of different concentrations of extract was added to 1 ml of DPPH and kept in dark for 30 min. DPPH assay was performed in triplicates. The absorbance of the colour was measured at 517 nm and the percentage of scavenging activity was calculated by using the following equation.

A0 is the Absorbance of control

A1 Absorbance of test

The results are expressed in terms of IC50 value.

Hydroxyl radicals were generated by Fenton reaction (Fe3+-ascorbate-EDTA-H2 O2 system), and the scavenging capacity towards the hydroxyl radicals was measured by using deoxyribose method. The reaction mixture contained 2-deoxy-2-ribose (2.8 mM), phosphate buffer (0.1 mM, pH 7.4), ferric chloride (20 μM), EDTA (100 μM), hydrogen peroxide (500 μM), ascorbic acid (100 μM) and different concentrations (100-600 μg/ml) of the different herb-herb combinations (1:1) in a final volume of 1 ml. The mixture was incubated for 1 h at 37°C. After the incubation, an aliquot of the reaction mixture (0.8 ml) was added to 2.8% TCA solution (1.5 ml), followed by TBA solution (1% in 50 mM sodium hydroxide, 1 ml) and sodium dodecyl sulphate (0.2 ml). The mixture was then heated (20 min at 90°C) to develop the colour. After cooling, the absorbance was measured at 532 nm against an appropriate blank solution. This scavenging activity was performed in triplicates. The percentage of inhibition was expressed according to the following equation:

A0 is the Absorbance of control

A1 is the Absorbance of test.

The results are expressed in terms of IC50 value.

All the experimental results were expressed in terms of IC50 value, which is the effective concentration at which the antioxidant activity is 50%.

DPPH assay method is mainly based on the reduction of methanolic solution of blue to dark purple coloured free radical DPPH by free radical scavenger. Basically, a higher DPPH radical-scavenging activity is associated with a lower IC50 value. Reaction with DPPH radicals of combination of standardized extracts showed better scavenging activity compared to individual extracts. The IC50 values for TCE+TAE, TCE+OSE, TAE+OSE were found to be 74.12 µg/ml, 78.62 µg/ml and 71.70 µg/ml respectively whereas IC50 value for ascorbic acid was found to be 69.05 μg/ml. A linear correlation coefficient (r2 =0.809, 0.863, 0.853) was obtained (Fig.1). Whereas TCE, OSE, TAE showed IC50 values of 97.09, 98.01, 96.07 respectively with linear correlation coefficient r2 = 0.970, 0.931, 0.889.

Effect of plant extract combinations or phytochemicals leading stronger effect as compared to individual extracts/compounds at the same concentrations is termed as synergistic effect. Synergistic antioxidant effect was observed with compounds such as vitamins E and C22, vitamin E and β-carotene23, catechin and malvidin-3- glucoside24, tea polyphenols and vitamin E25 and with varieties of fruits.26 In this study, for the first time, we employed to assess synergistic antioxidant effects raised with the combination of standardized extracts of T. cordifolia, T. arjuna and O. sanctum.

Natural polyphenols and carotenoids are the most potent antioxidants in human food, and their free radical scavenging properties are related to substitution of hydroxyl groups in the aromatic rings of phenolics.27 The plant type, geographic location, growing time, and storage condition can all affect the concentrations of polyphenols in food. Dietary polyphenols could be classified into five classes: flavonoids, coumarins, stilbenes, tannins and phenolic acids. Flavonoids are grouped as flavones, flavanols, flavanones, anthocyanidins, and isoflavonoids. Total phenolic content and total antioxidant activity in phytochemical extracts of different herbs may have a direct relationship. When the herbs contain high amount of total phenolic contents, they possess potential antioxidant activity. For example, the scavenging activity of grape seed extract against ABTS radical was strongly linked with the level of phenolic compounds.28

OCE is rich in volatile oil (0.7%), phenolics, flavonoids, neolignans, terpenoids and fatty acid derivatives.29 Caffeic acid, chlorogenic acid, vanillic acid, ocimumnaphthanoic acid and menthylsalicylic glucoside were also isolated from the aerial parts of O. Sanctum.30 Eugenol is one of the most distributed antioxidant phenyl propanoid in the essential oil of O. sanctum leaves. Other phenyl propane derivatives such as ociglycoside or eugenyl-βD-glucoside, citrusin C, ferulaldehyde, bieugenol and dehydrodieugenol were isolated from the leaves of O. Sanctum.31

The authors are thankful to the President, Soniya Education Trust and Principal, SET’s College of Pharmacy, Dharwad for encouragement, support and for providing the necessary facilities to carry out the research work. We are also thankful to Sami Labs Limited, Bangalore, Karnataka for providing standardised plant extracts as gift samples. 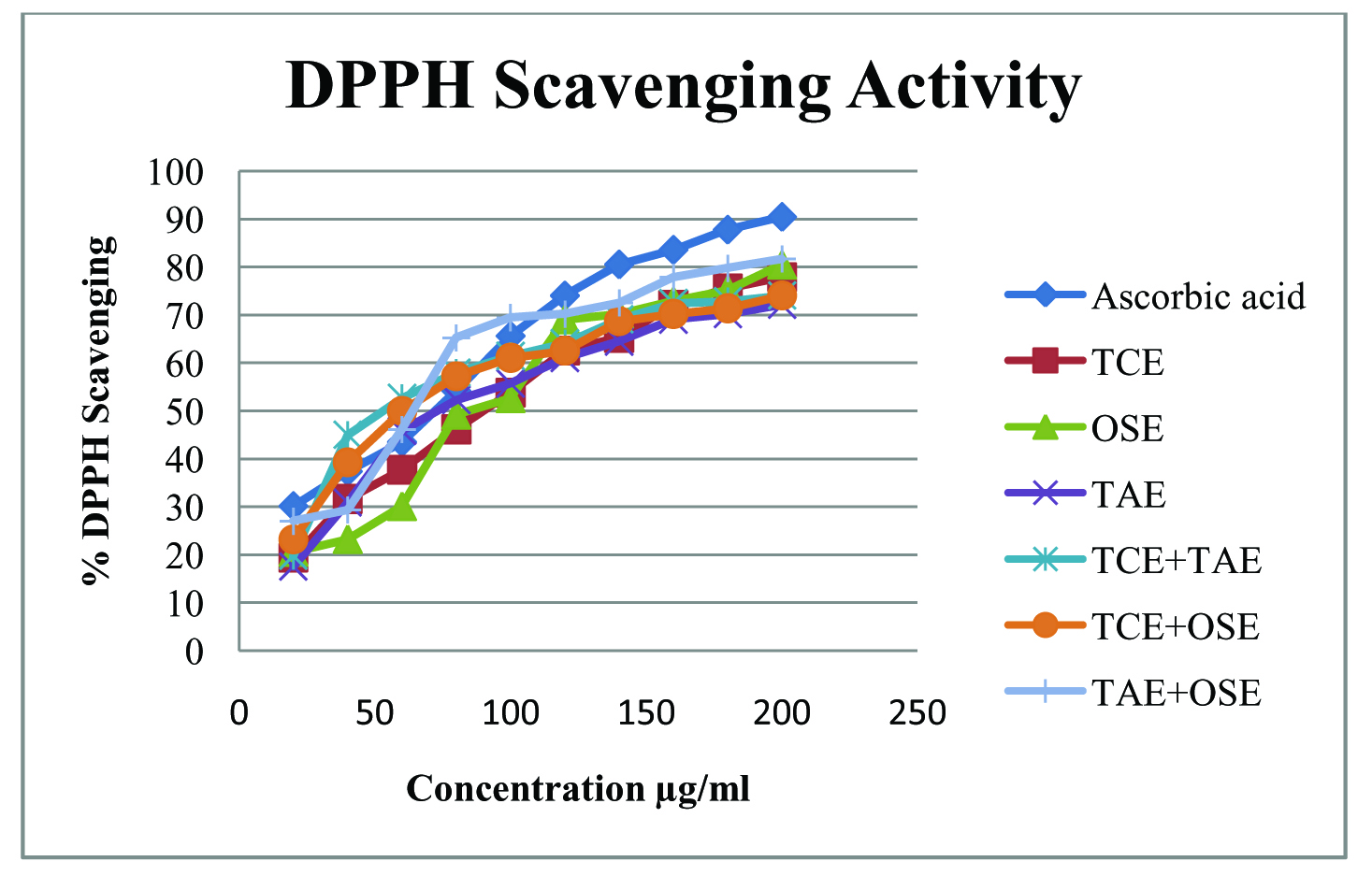 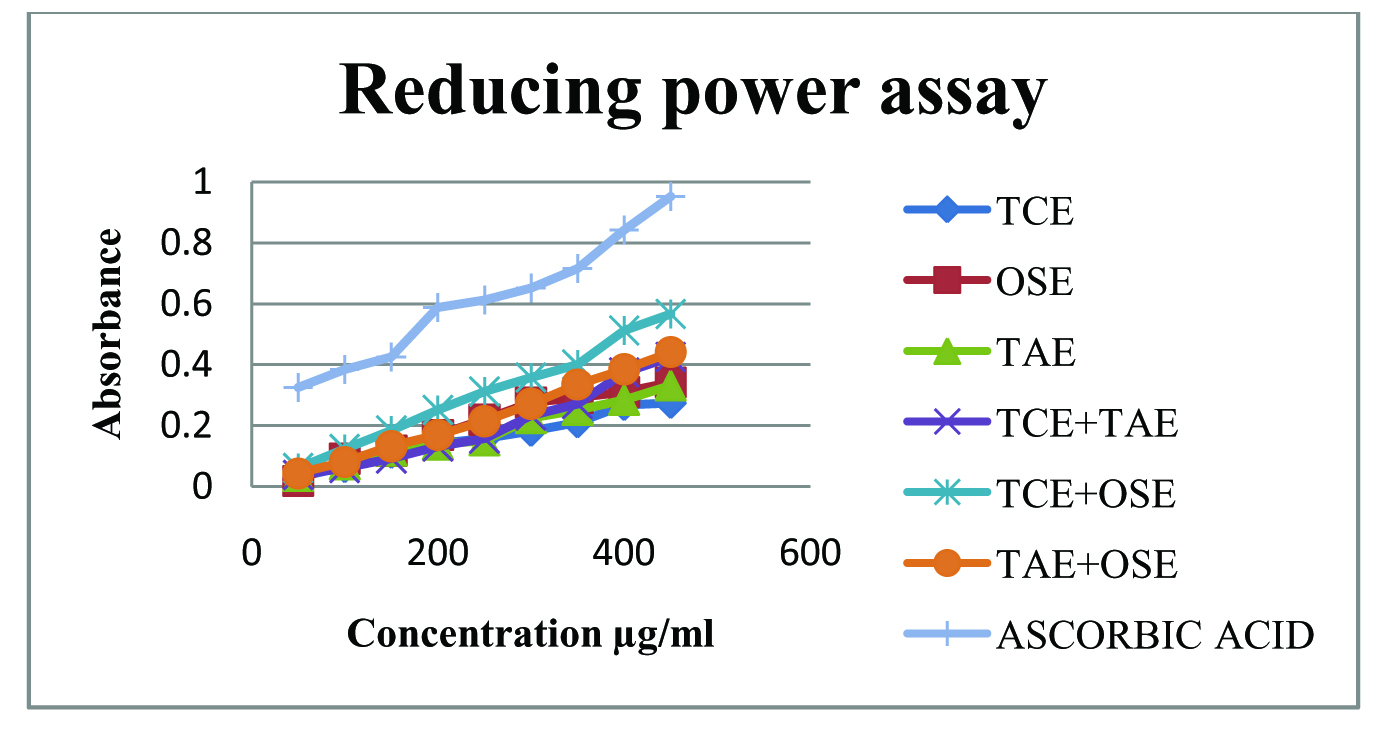 We use and utilize cookies and other similar technologies necessary to understand, optimize, and improve visitor's experience in our site. By continuing to use our site you agree to our Cookies, Privacy and Terms of Use Policies.